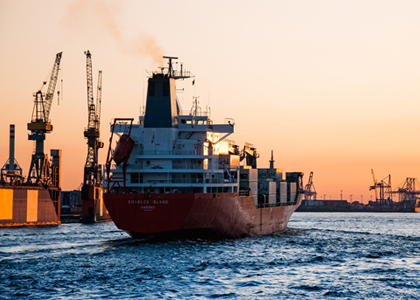 Maersk and MSC, the world’s leading maritime shipping companies, have chosen the King Abdullah Port as a logistics station for two new shipping routes, launched by the two companies, on the Red Sea.

The first shipping route, i.e. Maersk TP17, and MSC Americas, connects East Asian countries like China and Singapore, with the east coast of the USA. This rote will pass through King Abdullah Port as one of the fastest shipping routes connecting Eastern Asia, with the West, through the Red Sea.

The second route, i.e. Maersk AE15, and MSC Tiger, connects East Asian countries with South-Eastern Europe. Passing through the King Abdullah port, routes from South Korea, China, and Singapore will be linked to Turkish and Greek ports, the southeastern gateway to Europe.

The Kind Abdullah Port enjoys a strategic location, playing the role of an important link between the East and the West. The port has the potential to play a major role in the trade exchange between the world’s continents, hence supporting the global shipping industry.

The decision of Maersk and MSC to choose King Abdullah Port as a logistics station corroborates the port’s strategic significance.

King Abdullah Port is already one of the world’s 100 largest ports despite operating for less than four years. The port has quickly become the second-largest container port in the KSA within its limited years of operation. By assuming the role of an important logistics station at the Red Sea for two new shipping routes, the King Abdullah Port has been transformed into a major hub for global trade. The port will serve as the main shipping route between the East and West, thereby facilitating trade for major world economies.

Apart from the strategic advantage that its geographical location provides, the King Abdullah Port also rivals leading ports of the world due to its advanced, state-of-the-art infrastructure. This structural advantage will undoubtedly solidify its role as a link between Asia, Europe, and Africa.

Built-in accordance with the latest industry specifications, the King Abdullah Port is stocked with cutting-edge equipment, including the world’s deepest 18-m berths. These berths enable the port to service giant container ships. Currently, ten of the largest shipping lines work at the port to offer integrated services to importers and exporters.

While the port serves as a major international shipping station, it also continues to run local operations. The port not only ensures the continuity of international shipping through the strategic advantage of its geography, but it also guarantees the supply of goods inside the Kingdom through its access to highway networks connecting major cities to the port.

Cities such as Jeddah, Yanbu, Makkah, and Madinah are ensured a supply of goods to meet consumer needs through the speedy operations of the port. These goods include food, medication, and medical equipment. Even though the constraining times of COVID-19, the port’s efficient services and enhanced terminal facilities enabled the KSA to streamline its supply of necessary goods without major impediments to imports.

King Abdullah Port is the region’s first port to be fully owned, developed, and operated by the private sector. The port is run by the Ports Development Company and has been listed as the world’s fastest-growing container port. Its development plan is progressing steadily and with developments such as the Maersk and MSC decision, the port will mark its position as one of the leading ports worldwide. The port can reasonably depend on its facilities, technology, as well as proximity to a bonded and re-export zone and logistics park, for growth in the future.